For as long as I can remember I've wanted to explore America, an ambition fuelled by a legion of TV shows that crossed the Atlantic in the 1960s. As a young and impressionable child growing up on the outskirts of Leicester, a city in the English midlands, I devoured The Man From Uncle and The Fugitive. But it was the westerns, evoking a landscape altogether removed from the congested suburbs surrounding me, that I loved most: Bonanza, The High Chaparral, The Virginian and in particular Casey Jones, the adventures of a middle-aged railroad driver putting the world to rights.

It was Postcards from America that made that dream a reality. Postcards was an idea generated within Magnum which encouraged collaboration between the participating photographers and inspired innovative ways of disseminating our work. When invited to join the group, I began –  although I may have not have realised it at the time – to search for the America that lived in my imagination, the one generated during childhood, the one that probably never existed at all.

My first trip with the Postcards team was to Miami, Florida in November 2012, just before the election of Barack Obama for his second term in office. (For those interested, the pictures from this visit were made on 5"x4" film; all subsequent work was produced digitally, using an Alpa with a Phase One back). My second Postcards expedition was to Milwaukee, Wisconsin, some 18 months later; sandwiched inbetween was an assignment for Atlantic Philanthropies, which included a visit to Cornell University in upstate New York.

From these humble beginnings began the project that will eventually last a decade. On this website I've divided the work from Good Morning, America into separate years, and within each folder the pictures are sequenced chronologically. 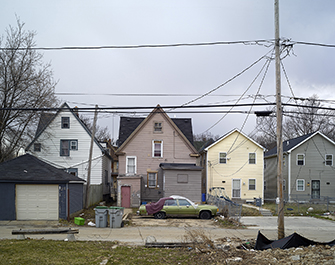