From the introduction to the book 'Home' (published by Magnum Photos, Tokyo, 2018) by the project coordinator, Pauline Vermare:

"In 2017, Fujifilm invited Magnum Photos to collaborate on an ambitious project: a group of photographers would be asked to reflect on one theme, in their own style and sensibility, with the same camera. The theme they were to explore, universally known in English as 'home', was chosen precisely for its global nature, and for the inherently human sentiment that it conveys."

The introduction to my own contribution, used in the book and exhibition:

"In September, our daughter Chilli left home for Goldsmiths University in London to study for a degree in Fine Art. And so began a new chapter in her life, and in ours.

Any parent who has been through a similar traumatic event must surely recognise how confused emotions become, and how deep they run. After all, Chilli had lived with us for 19 precious years. Her departure would have an impact on us all, and not least on her younger brother Milligan.

To be honest, it was the last subject I wanted to tackle, but the fact that the deadline for our projects coincided with the very day she was to leave suggested I had no alternative. But if I was going to do it, my family agreed, then it was essential we were all open and honest, and would proceed without embarrassment.

As a postscript, life here in Brighton has since returned to normality and Chilli is flourishing at university. She is already calling London home."

What if this road, that has held no surprises
these many years, decided not to go
home after all; what if it could turn
left or right with no more ado
than a kite-tail? What if its tarry skin
were like a long, supple bolt of cloth,
that is shaken and rolled out, and takes
a new shape from the contours beneath?
And if it chose to lay itself down
in a new way; around a blind corner,
across hills you must climb without knowing
what’s on the other side; who would not hanker
to be going, at all risks? Who wants to know
a story’s end, or where a road will go? 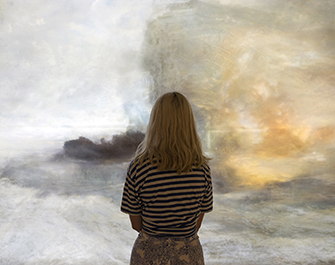