In 2015, The Macallan, producers of the world-renowned single malt whisky, invited six Magnum photographers to help create its next Masters of Photography edition, released to mark the completion of the new distillery and visitor experience on The Macallan Estate, above the River Spey, north-east Scotland.

Charged specifically with documenting the build from beginning to end, my own work soon became the backbone of the project. However, this didn’t inhibit my approach; as always with these kind of projects I tried to create work inspired by the building, rather than pictures of the building… a subtle but important difference (see first 'Photographs' option below).

On most visits to the site I was accompanied by my partner, Jo Coles. Officially, she was acting as my assistant but, in fact, Jo spent her time collecting discarded objects from the site (see second 'Photographs' option below).

The new distillery was designed by Rogers Stirk Harbour and Partners. 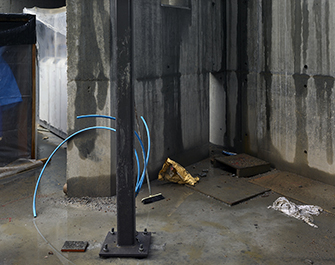